The loveliest people and mountains are found in Nepal. My wife and I were recently privileged enough to make a 4 week trip to this amazing country. We arrived at the beginning of November after 33 hrs of flights (it seems about as far as you can get from Canada!). Here are 7 essential parts to being homeless in Nepal:

1. THE PREP. In many ways we were in a perfect position to leave the ‘Canadian versions’ of Ryck and Steph and become the ‘international versions’ of Ryck and Steph. Also, our beloved osprey backpacks were pressuring us for another international adventure (sometimes I like to think that our bags are sentient and when we travel we’re really just porters carrying them to new countries and over mountains).

Next, all of our belongings were already in storage unit, and we had no mortgage or even rent to worry about. You see, we are currently homeless. After leaving our home of 3 years in Saskatoon last year, we never achieved more than ‘no fixed address’ status. We have bounced from town to town working for 6 months around Canada and this has culminated in our current trip. When forms ask us for our address we smile and put in our parents address. 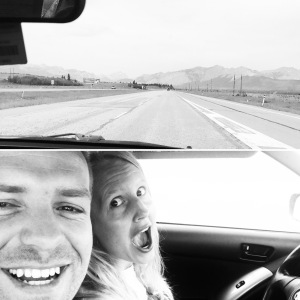 2. TO NEPAL! Nepal has held our thoughts for quite a few years. Some amazing friends made the journey before us and struck up the desire in our hearts. Being avid hikers, we also loved the idea of exploring the Himalayas. The land of giants that plunge as high as airplanes into the blue and poke holes in the jet stream. 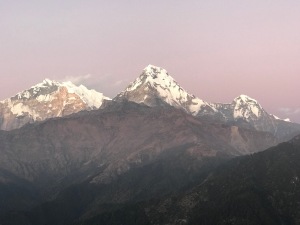 Arriving at night, the airport was organized chaos. People were there to herd us to our next task, but no system was obvious or particularly efficient. We were shuttled from one desk to the next to get our visa on arrival and stood in lines we weren’t totally sure were intended for us or necessary, but finally made it to the final line. This line inexplicably had another security check complete with metal detector and X-ray scanner for carry on bags. Carry on bags! The ones we just got off the plane with may not be safe enough to carry into the country!

A little confused, I put my bag onto the conveyor belt and started to empty my pockets of a handful of Hong Kong coins, not wanting to set off a metal detector in this odd airport. But a security guard stopped me and just pointed that I should walk through. With a ridiculous amount of metal on me I started imagining what was about to happen after setting off this metal detector in spectacular fashion. The security guard simply nodded approvingly and sent me on without any trouble. The cherry on top was that the bag scanner wasn’t even on!

3. THE NEPALESE PEOPLE. A main highlight for me were the amazing people we met on our journey. The guide that we had arranged for our trek met us outside the airport, and with a big smile he adorned us with traditional Buddhist scarves as a welcome. Despite our fatigue we had lots of questions for him on our way to the hotel which he answered patiently. The cab ride was a soft introduction to the chaotic driving culture of Nepal where the only rule seems to be to honk before you do anything. Our guide, Bhabi, was an amazing, self sacrificing, patient and doting man that never had a bad day. Judging from the other guides we met this was the rule not the exception.

The Nepali were so welcoming and helpful everywhere we went. Their lovely nature and commitment to family is also evident in their language. To address one another they use bai/baini meaning little brother/sister, also dai/didi meaning older brother/sister etc. The truly great part of this system is that every time you address a stranger you first have to guess their age! 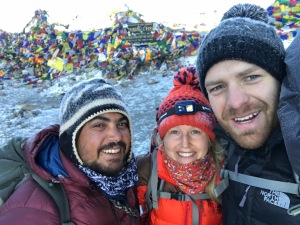 4. THE HIMALAYAS! These giants are an obvious attraction for anyone venturing to Nepal. Standing among them at high elevation fills anyone with wonder and awe. We spent 14 days trekking the Annapurna Circuit and it was phenomenal. The landscapes varied from jungle to desert to alpine to high altitude. Hot springs abounded and we sat in one thinking about how just 3 days ago we were at an altitude of 5416m (nearly 18000 ft) in -25 Celsius conditions at the Thorung La pass. Endless cups of tea were enjoyed resting our legs and backs from the days trekking. In total, we had 11 days of trekking travelling over 160 km with around 7000m of elevation gain! (That amounts to about 15km/day). 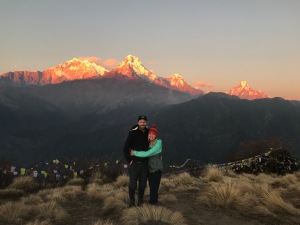 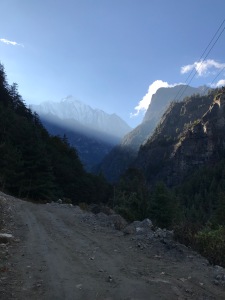 5. POKHARA! This is the second biggest city in Nepal, and though only about 300km west of Kathmandu it is a full days bus ride through some crazy terrain and traffic. The tourist area of the city borders the lake, and features an oasis of good food, drink and hotels that we fully indulged in after spending a couple weeks in remote towns! A highlight here was renting a party paddle boat for just the two of us to cruise about the lake in style. We set off down the shoreline of the lake and around the island temple, beers in hand. It was lovely. 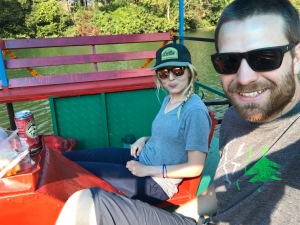 6. CHITWAN NATIONAL PARK! This was something of an after thought on our trip and we only decided last minute to take a break on our way back to Kathmandu. It was meant as a small detour but travelling just 75 km on Nepal’s roads can easily take 4 hours!

To our delight, we didn’t have to go far to see elephants in town as they would walk right by you on the roads (accompanied by their owner of course). We stopped to pet as many as we could!

I was told Chitwan means the heart of the jungle, and jungle is what we got. Waking up at the crack of dawn, we spent an hour cruising into the park by canoe (picture a hollowed out tree with 15 tourists crammed in it and a local man standing at the back paddling). The next 4 hrs took us quietly back to town. We saw some spotted deer, rhesus macaw monkeys, wild boar, alligators and almost a wild elephant. The almost could also be translated as ‘we heard an wild elephant and if we waited too long could’ve been killed’. I will explain…

We had been informed at various points that wild elephants were more dangerous than alligators or rhinos, and we needed to carefully follow our guides instructions if we came across one. These words came back with force when suddenly we stopped and could hear deep breathing and the snapping of relatively large trees only about meters away! Our guide was listening intently and we received these helpful instructions in a forced whisper: “I’m 90% sure it’s a rhinoceros, but if it happens to be an elephant we have to run that way as fast as we can!” Poised to take off we watched anxiously as the gray outline of an elephant appeared with a long trunk sweeping through the trees! Luckily it was already angling away from us so the best course of action was to sneak away before he noticed us!

We didn’t get to see a single rhino on our long walk. So we decided to console ourselves with a relaxing lunch on the river facing the park. And what happens to just walk out just down from us, two rhinos! From the safety of the river bank we probably got to see them closer than if we had been hiking anyways! 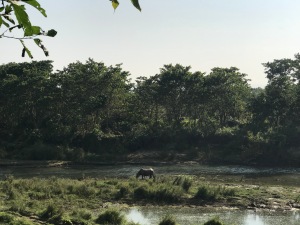 However, the coolest thing we saw was actually a bird! Apparently, it is rare to see great hornbills but we were fortunate to get a few glimpses of them and hear their odd mating calls that sound like a barking/growling dog.

7. KATHMANDU/TEMPLES/STUPAS! Kathmandu was bustling and a bit chaotic, but also charming in its own way. There were still signs of the city rebuilding since the massive earthquake in 2015, and if you walk down any street long enough you’ll come across an amazing stupa or temple built some centuries ago.

My favourite place was colloquially dubbed the monkey temple and the name was immediately obvious on arrival. We had walked about 2 km to get there, so I stopped to buy some peanuts from a street vendor (something I hadn’t done yet on the trip but for some reason the urge just struck me). Admiring my bag as I made it across the street to the foot of the temple, I looked to find Steph who had gone ahead. The next thing I knew a swarm of monkeys (honestly like 10-15!) descended upon me! The next moment a large buggar climbed a statue and swung around it, extended his arm and smacked the bag. Reeling, I spun away and gripped the bag tighter. I now had monkeys bumping into my legs reaching their arms up at me like beggars. I looked down at them and was distracted just long enough for another to take a running leap behind me, elevating himself at least 3 feet off the ground. I noticed him just in time to yank the bag of peanuts higher. Bewildered and laughing, I now had no idea what to do. I could see all the locals and Steph were enjoying the show, and some were sympathetic enough to yell that I should hide the peanuts in my bag. Easier said than done with a pack of monkeys ready to take advantage of any misstep. Later on the way up I discovered that feeding them was possible (and fun) in small handfuls!

3 thoughts on “Homeless in Nepal!”